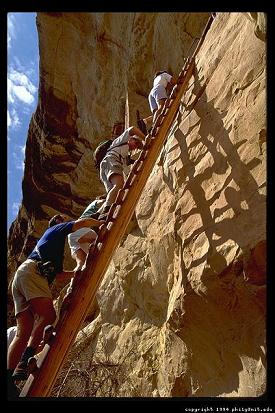 So it should be self-evident, if you are following this at all, that the people you want to have sex with the most will be at the top of the ladder. Descending down to the bottom of the ladder we pass the following people:

Clinging to the bottom are the girls that are wolf ugly. These are women so ugly you would chew your own arm off to get away rather than fuck them. Usually fake teeth, or the loss of several hundred pounds can move a woman up from wolf ugly.

The first thing to notice here is that a woman has not one ,but two ladders. This is becasue in addition the normal ladder, a woman also has a friends ladder. The friends ladder is where a woman puts guys that she considers “just friends”. More to the point where she puts guys who don’t get to have sex with her.

The problem arises because a woman never lets a guy know which ladder he is on. Obviously there is a huge difference, or gap between these two ladders. It is in this gap that kisses of death are delivered and intellectual whores are made. All a man can do is “go for it” and make a move on a girl; ask her out, try to kiss her, write her a love note or whatever. If he’s on the good ladder fine. If he is on the friends ladder this is a case of ladder jumping. The man is trying to jump the gap from the friends ladder to the real ladder. The girl has two choices at this point: she can let him on the ladder and all is well, or, more likely, she can kick him in the head, and off the ladder. If you look you’ll see that below the ladder is the Abyss(what was it Nietzsche said about a man being on a rope stretched over an Abyss?….well it’s worse than he thought; there is no rope.) So the man falls into the Abyss. The Abyss isn’t really as bad as it sounds. Mostly it’s a period of self-loathing, embarrassment, and of course utter awkwardness with the girl in question if they are talking at all.

IF A MAN FINDS YOU ATTRACTIVE YOU CANNOT BE FRIENDS

Many women want to argue this point and say things like “ I have lots of guy friends.” Maybe. There are exactly 3 cases Intellectual Whores has identified whereby a guy and a girl can be friends:

1. The guy is gay
2. The guy does not find you attractive.
3. The guy already has a woman much higher than you on the ladder

Even Nietzsche knew this. Most guys know this intuitively. Most girls doubt. I have a challenge for all of you girls who still doubt. Pick a guy who does not meet any of the criterion on the above list that you think is your friend. Then ask yourself this question: If you were both alone at his place one night, and you excused yourself to the bathroom and came out naked and asked him to have sex with you would he:

1. Tell you he doesn’t want to risk the beautiful friendship you have created with messy physical entanglements.
2. Comply

Remember this only works if you are honest with yourself. Number one is of course something that guys hear all the time. Intellectual Whores refers to it as the Kiss of Death. It is more likely that he will jump you eagerly.

Convieniently, the ladder theory answers the oft asked question, “What is the purpose of life?” The purpose of life is to move up the ladder. The person you are with now should be better (higher on your ladder) than the person you were last with. Okay it’s not perfect but if you have no direction in life, trying to fuck hotter and hotter chicks or richer and richer guys is as good a place as any to start. In addition to giving a good base toward a meaning of life there are a few other things that ladder theory explains.

Have you ever seen a guy that was not particularly attractive, rich or muscled yet was with a lovely woman? For most guys the most common reaction is envy, something like “Hey I’m not all that muscled, attractive or rich either. Why can’t I be fucking a girl like that?” We at intellectual whores used to feel this way about “stump factor” as well. But then ladder theory was discovered and we realized that it was more rational to pity this man.

Ladder theory tells us that the purpose of life is to move up the ladder. When their relationship ends, he will probably never be able to get another woman as good as the one he is with right now — the rest of his life he’ll likely be striving in vain. In effect, he’s doomed the whole rest of his life to meaninglessness unless he marries this girl. This of course is just trading one type of doom for another.

Blasphemy is a victimless crime.