Xocai – the nasty tale of a Norwegian chocolate mafia 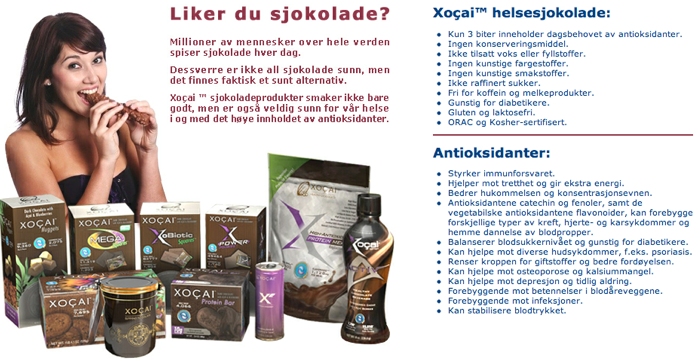 Xocai – the nasty tale of a Norwegian chocolate mafia

This is an English translation of my Norwegian blogpost which can be found here. After the original Norwegian version of this blogpost went viral on June 26nd 2012 it was shared more than 10 000 times on Facebook and had more than 50 000 pageviews within 24 hours!

Links to all media coverage of this case can be found at the bottom of the Norwegian blogpost.

Xoçai – the nasty tale of a Norwegian chocolate mafia

The Norwegian alternative-industry wish to seem like a free group of noble individuals who by supplying different sorts of traditional treatments or nutritional supplements attempt to help people. In this they always make sure they show the contrast to big-bad-pharma; which is purely profit driven and doesn’t actually wish anyone well. Quite a few people buy into this, but as we see time after time when we scratch the surface; these noble suppliers of alternative treatments or nutritional supplements without documented effects are as a rule driven by economic motives.

Not that there’s anything wrong with that in itself. Everyone should be able to earn a living. The problem is that the businesses these people run often are neither honest nor particularly good-natured.

We’ve recently seen Kjetil Dreyer of “Vaksineaksjonen” (anti-vaccine campaign) recommend people suffering from chronic diseases from Lyme disease to AIDS to rather drink his silver water than use conventional medicine. He uses the weakest among us as a means to money through the sale of products from his own web shop, Altshop. That replacing HIV-medication with silver water entails a much quicker death for these people doesn’t matter much as long as he can portray himself as a Health-Messiah and earn a small fortune from selling overpriced silver nanoparticles while he’s at it.

Dreyer is only one among many cynical sharks in these waters. I was recently contacted by a guy who in his desperation asked my advice. That is, this happened in the end of April, but I’ve let it lie for a while to see if anything changed. The case, it seems, has now reached its conclusion, so the time is ripe for sharing this with the world.