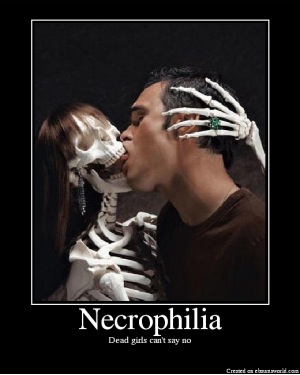 Police say the three men, carrying shovels, a crowbar and a box of condoms, went to a cemetery in southwestern Wisconsin in 2006 to dig up the body of Laura Tennessen, 20, who had been killed the week before in a motorcycle crash.

Nicholas Grunke had seen an obituary photo of her and asked the others for help digging up her corpse so he could have sexual intercourse with it, prosecutors say.

Authorities say the men used shovels to reach her grave but were unable to pry open the vault. They fled when a car drove into the cemetery and were eventually arrested.

[the] law makes sex acts with dead people illegal because they are unable to give consent.

[…] state law bans sexual intercourse with anyone who does not give consent «whether a victim is dead or alive at the time.«